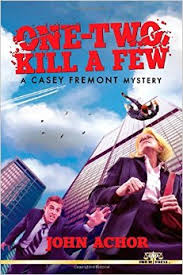 Achor will be signing his mystery novel at That Bookstore in Blytheville, Arkansas, 316 W Main Street at 1 p.m. on Saturday, December 13, 2014

Struggling to recover from a disastrous marriage and contentious divorce, Casey Fremont would prefer to make ends meet with her paycheck from a temp job; but now her goal of personal and mental renewal becomes one of staying alive as she solves a riddle of murder and mayhem.

Casey Fremont is on her way to interview for a temp job when a falling body nearly lands on her. Three days later, a second man, this one from her own office, dies in a similar manner and Casey is drawn into the intrigue. She confirms her suspicions, but one of her friends ends up in the hands of kidnappers. Casey must solve the mystery before she becomes the third body to go over the railing.

“One-Two, Kill A Few” is available in print edition from Amazon and Barnes & Noble. The eBook version is also available for the Kindle (Amazon) as well as Barnes & Nobel (Nook).