Pauline Marie Pfeiffer was born July 22, 1895, in Parkersburg, Iowa. She moved with her family to St. Louis in 1901, in time to start first grade at the Academy of the Visitation. Less than a month after her high school graduation from the Academy in June 1913, the family moved to Piggott, Arkansas. Two years later, she headed off to the University of Missouri School of Journalism, where she earned her degree in 1918. 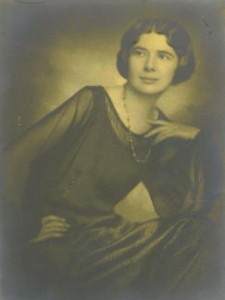 After a stint on the night desk at the Cleveland Press in Ohio, Pauline found her way to New York, where she worked for the Daily Telegraph, Vanity Fair and Vogue. Her flair for fashion and her writing and copy editing skills led to the offer to join Vogue’s Paris bureau, where she became involved with Ernest Hemingway.

Ernest and Pauline married in 1927 and returned to the states in 1928, ultimately acquiring a home in Key West, Florida. Pauline retained the home after their 1940 divorce, opening a designer fabric, upholstery and gift business known as the Carolina Shop. She was joined in the business by her long-time friend, Lorine Thompson.

Pauline also spent considerable time in California, where she maintained an apartment in San Francisco and frequently visited her sister, Virginia Pfeiffer, at the Hollywood home she shared with Laura Archera and her husband, Aldous Huxley. On Oct. 1, 1951, Pauline died of a brain hemorrhage while visiting her sister in Hollywood. She is buried in Hollywood.