Ernest Hemingway was born July 21, 1899, in Oak Park, Illinois, to Dr. and Mrs. Clarence Hemingway. After high school, the young Hemingway shunned college for a series of adventures that included serving as a cub reporter for the Kansas City Star, an ambulance driver for the Red Cross on the Italian front in World War I, a sparring partner for boxers in Chicago, and a writer for the Toronto Star. 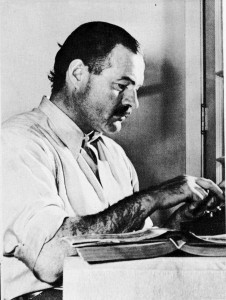 During his stay in Chicago, he married Hadley Richardson, formerly of St. Louis, and the pair moved to Paris where he began honing his writing skills. After six years of marriage and one son, John (known as Jack or Bumby), Hemingway divorced Hadley in 1927 to marry Pauline Pfeiffer.His marriage to Pauline began to crumble after he met Martha Gellhorn, also a writer and war correspondent during the Spanish Civil War. Hemingway divorced Pauline in 1940 and married Martha. That marriage failed also, and in 1946 he married Mary Welsh, another journalist, who remained at his side until his death.

After his divorce from Pauline, Hemingway moved from their home in Key West to Cuba, maintaining a home just outside Havana—Finca Vigia (Lookout Farm). When the Cuban Revolution forced his departure in 1960, Hemingway and his wife, Mary, relocated to Ketchum, Idaho.

The Old Man and the Sea, one of Hemingway’s best known stories, was published in 1952, earning him both the Pulitzer Prize and the Nobel Prize. After achieving this great literary pinnacle, however, his health continued to deteriorate. He committed suicide in his Ketchum, Idaho home on July 2, 1961.