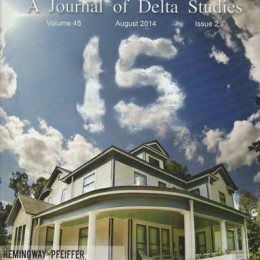 The most recent issue of The Arkansas Review:  A Journal of Delta Studies celebrates the 15th anniversary of the opening of the Hemingway-Pfeiffer Museum.  The special issue features both scholars and creative writers who have been influenced by the museum.  The scholars expand on the current understanding of the Hemingways and Pfeiffers by drawing on information found in the museum’s archives.  The creative writers are participants and mentors of the semiannual Hemingway-Pfeiffer Writers’ Retreats, and their submissions were either written in Piggott or inspired by their time at the retreats.  To learn more about this special issue, read Elaine Fowler Palencia’s review by clicking here. 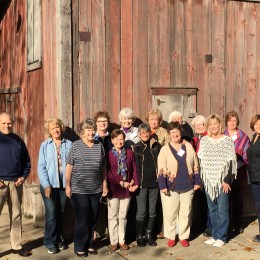 The Hemingway-Pfeiffer Museum & Educational Center recently held its Fall Writers’ Retreat. Thirteen talented writers from five states came together to hone their skills and to form a community in Northeast Arkansas at the site where Ernest Hemingway penned much of his iconic novel A Farewell to Arms.

Pat Carr of Fayetteville, Arkansas, served as mentor for the retreat. She has a B.A. and M.A. from Rice, a Ph.D. from Tulane and has taught writing and literature in universities and workshops across the country. She’s published sixteen books, including The Women in the Mirror, winner of the prestigious Iowa Fiction Award, and Death of a Confederate Colonel, winner of both the PEN Southwest Fiction Award and John Estes Cooke Civil War Fiction Award, and she has over a hundred short stories published in such places as The Southern Review and Best American Short Stories. Her most recent books are a memoir, One Page at a Time (2010), a how-to text, Writing Fiction with Pat Carr (2010), and a novella, The Radiance of Fossils (2012).

Writers began each day with group activities designed to inspire and encourage creative thought followed by a time to write. They enjoyed lunch together at the Educational Center and ended the afternoon with a group meeting to reflect, share, and discuss the products and processes used by each writer. The format allowed writers time to focus on their own creative interests, to receive feedback on their work, and to form relationships with other writers.

Writers’ Retreats are held twice annually at the Hemingway-Pfeiffer Museum in Piggott. The next retreat is scheduled for June 1-5, 2015, with Garry Craig Powell of Conway serving as mentor.